A North Lanarkshire community living with the legacy of the withdrawal of heavy industry is enjoying a new lease of life as a result of an ambitious partnership project involving SEPA.

Stane Gardens, in Shotts, had once been home to both an iron works and a tar factory, but following the decline of these industries the community was left with a degraded South Calder river, which had been lined with concrete and buried underground. The enduring legacy of the historical industries was uncovered when routine works in the area discovered large quantities of oil and tar just below the surface of the Stane Gardens site, posing a risk to the local community and the surrounding environment.

The degraded nature of the South Calder, and its proximity to areas of contaminated land that the local authority wished to remediate, meant that SEPA could consider use of the Water Environment Fund to help address the issue. SEPA entered into a partnership with North Lanarkshire Council and the Scottish Government to transform the area from a liability into an attractive greenspace that would be an asset to the local communities’ ecology and economy.

Work began in 2011 to make safe the contaminated soil, open up the river to create a natural water feature, and put in place a network of footpaths. The transformation has been dramatic, with many and varied benefits already being experienced by residents, businesses and public service providers alike.

The environmental benefits are obvious. Some 500m of open-river have been created, new and diverse wildlife habitats have been established, and contaminated land has been cleaned up. But looking more widely, a new Country Park has been established in the heart of Shotts, giving urban residents easy access to greenspace and the river, and the associated health and well-being benefits. And the new footpath network has provided safe, green routes to school, so children can now avoid busy roads. The flood risk to the nearby Health Centre has been alleviated, so the flooding which recently cost £2m to remedy should now be a thing of the past. Local housing development has accelerated due to the increase in house prices resulting from the attractiveness of the greenspace, bringing welcome economic development to the area.

The new park has also engendered a sense of ownership from the local community, and the Stand up for Shotts group is engaged in the design and installation of public artworks to further enhance the area. The community view can perhaps be summed up by one local resident who said “this will be a major boost to the community”, and the Convener of the Council’s Environmental Services Committee who said “by working in partnership with SEPA we have been able to remove the problem of historical contamination, and bring new life to the site.” 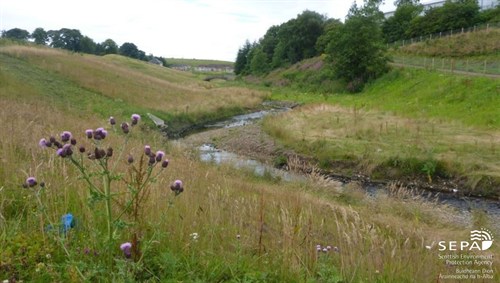 Stane Gardens is one example of how SEPA works as an environment protection agency fit for purpose in the 21st century. This was a collaborative project providing lasting environmental improvements, community well-being and enhanced economic development. This initiative shows the success of One Planet Prosperity in action. SEPA, by working in partnership with North Lanarkshire Council and the Scottish Government, facilitated ways of working in harmony with our planet’s environmental conditions whilst bolstering the socio-economic health of the local area in turn.

This initiative is targeted at the following Sustainable Development Goals (SDGs):

You can find more examples of One Planet Prosperity in action here.