Cyber-Attack: Our Response and Service Status

Anyone disposing of waste at a landfill site in Scotland is due to pay Scottish Landfill Tax. This tax is one of the first to be devolved to Scotland from the rest of the UK. From 1 April 2015 this tax has been collected by Revenue Scotland.

Landfill tax previously collected by HMRC, aims to encourage waste producers to produce less and recover more value from it. Since the introduction of the tax in 1996, it is viewed as being a key factor in the changing of attitudes and the diversion of waste from landfill. The Scottish Landfill Tax continues with this aim and is consistent with the Scottish Government’s Zero Waste Plan. The graph below displays the historic fall of waste landfilled in Scotland against the rising landfill tax. 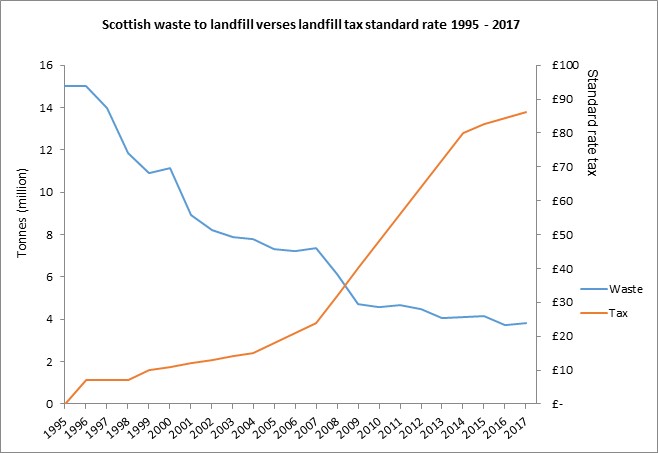 Revenue Scotland are responsible for landfill tax and will be responsible for any future devolved taxes in Scotland. Our duties with regard to the regulation of landfill sites and the collection of waste data put us in a prime position to assist Revenue Scotland with this task. The intention is that this partnership will offer a more streamlined solution for the waste industry.

Information on Scottish Landfill Tax Rates can be found on the Revenue Scotland's website.

Scottish Landfill Tax may be charged to anyone found to be running an illegal waste disposal activity, such as an unlicensed landfill site. This is in addition to our remit to tackle waste crime using environmental legislation, meaning offenders may face a fine and will be required to pay the tax they owe on that site. It is hoped that this power will be seen as a significant financial deterrent to illegal operators. If you are aware of illegal waste activities near you they can be reported to us directly or via Crimestoppers anonymously.