Marine finfish farming across Scotland operates using open-net pens. Several hundred thousand fish will be farmed at most farms. Fish excreta; uneaten food; used fish medicines and other chemicals escape through the nets into the marine environment. The heavier, organic particles and any medicines sticking to them are deposited on the sea floor. Natural biological processes then break down and assimilate the wastes over time. Dissolved chemicals released from the farm, including some medicine residues and compounds of nitrogen, together with chemicals that are re-suspended from the deposited wastes, disperse in the sea until broken down or assimilated.

To protect the marine environment, the quantity of wastes released from finfish farms must be appropriately matched to the sea’s capacity to disperse and assimilate them so that they do not reach levels that would harm sea life. It is SEPA’s role as environmental regulator to make sure this is the case. The two main factors that determine whether wastes from a fish farm are sufficiently diluted are:

(a) The quantity of the wastes being released. This depends on the size of the farm.

(b) The capacity of the sea to disperse the wastes. This varies according to strength of tides and, to a lesser extent, winds.

Immediately around fish farm pens, there is typically a zone in which organic waste such as fish excreta and uneaten food are not fully mixed and dispersed in the surrounding sea. As this material falls onto the seabed it can smother animals, particularly those that live fixed in one place. The breakdown of this material then lowers oxygen levels and releases chemicals, such as ammonia, that are toxic to marine organisms.

Some medicines are incorporated into fish food (“in-feed medicines”). This medicated food is fed to the fish over a number of days and residues of the medicines are excreted by the treated fish. The medicine residues in the excreta and any uneaten medicated food sink to the seabed alongside other organic waste. These residues can then accumulate on the seafloor to levels that are toxic to seabed organisms.

Our regulatory framework limits the maximum area of the mixing zone (Figure 1). The limit is equivalent to the area lying within 100 metres of the pens in all directions. Wastes are rarely deposited on the seabed in a perfectly symmetrical pattern around farms. Tides and seabed topography tend to spread material further in some directions than others, typically producing something resembling an ellipse-like shape of deposited material. Accordingly, the framework provides for mixing zones that are not symmetrical. Mixing zones may extend more than 100 metres from the pens in some directions provided their maximum area does not exceed the area that a symmetrical, 100 metre mixing zone would have.

The seas around Scotland support a wide variety of plant and animal life. This includes species and habitats that are particularly rare or threatened, many which are protected under law. Mixing zones in the wrong location could adversely affect these and also affect other people’s uses of the sea, such as for shellfish farming. For all proposed fish farm developments, we ensure that risks to protected wildlife and to other uses of the sea are properly assessed. We do not permit mixing zones that would extend into locations where they would be likely to compromise the conservation status of marine protected areas[1] or priority marine features[2]; or other people’s uses of the sea. 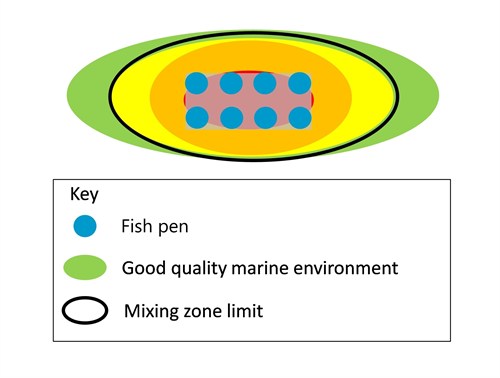 Our regulatory framework requires farm operators to manage their sites so that there is no significant adverse impact on the biodiversity of seabed life beyond the edge of the permitted mixing zone. To make sure this is the case, we use the results of sophisticated computer modelling to assess whether proposed farm developments will be able to operate without compromising biological and chemical environmental standards for good status beyond the mixing zone. When making these assessments, we will consider the risks posed in combination with any existing pressures on environmental quality from other activities. For operational farms, we use the results of environmental monitoring to check that good quality is being maintained.

The environmental standards required for good quality are:

The Directions do not currently include quality standards for seabed habitats dominated by large stones, rock or other hard materials. We will use visual imagery survey results to assess the condition of these habitats where they lie within the mixing zone of a farm.

Within the mixing zone, operators must ensure that wastes do not accumulate to levels that would compromise the biological process needed to breakdown and assimilate them. We use the latest computer modelling to assess whether proposed developments will be able to operate without compromising these processes. Environmental monitoring results are used to check that the required standards are being maintained at operational sites.

The most common environmental standards that are used under our regulatory framework to ensure the protection of the seabed are listed in Table 1. We will refuse to grant an authorisation for proposed farm developments that are unlikely, to achieve seabed quality standards.

Protecting the quality of sea water

Some sea lice medicines are applied by immersing the fish in a solution of the medicine topical medicines). This may be done by creating a bath on the farm or by taking the fish to a container of medicine located on a boat, called a well-boat. Once the fish have been treated, the water containing the medicine residues is released into the sea where it disperses away from the farm.

We regulate discharges of medicine residues from bath treatments. Under our regulatory framework, fish farm operators have to ensure that within specified periods of time after a medicine’s discharge from a bath into the sea, it has been sufficiently diluted to achieve the environmental standards defined for each of those periods of exposure to the medicine (Table 2). The periods of time vary depending on the medicine used. The two medicines currently used for bath treatments are the organophosphate, azamethiphos, and the pyrethroid, deltamethrin.

Discharges of treatment solutions from well-boats are currently regulated separately by Marine Scotland. The Scottish Government is preparing to transfer responsibility for the control of these discharges to SEPA.

As part of our Sector Plan for Finfish Aquaculture, we will be reviewing our approach to how we protect the marine environment from discharges of topical medicines.

Fish farms release compounds of nitrogen, principally ammonia and urea, into sea water. The vast majority of this enters from fish excreta. Dissolved organic compounds of nitrogen are also released and re-suspended into the water from organic waste deposited on the seabed. Some of these nitrogen compounds have the potential to be toxic if they are present in sufficiently high concentrations. Dissolved nitrogen compounds are also taken up as a nutrient by phytoplankton, seaweeds and other marine plants. In excess, dissolved nitrogen can accelerate growth and result in a cascade of changes to the biodiversity and functioning of marine ecosystems.

Under our regulatory framework, we use guidelines prepared by Marine Scotland to screen proposals to assess the likelihood of risks to the marine environment from compounds of nitrogen. Where screening indicates there may be little or no capacity for further inputs of nitrogen into a sea area, fish farm businesses wishing to develop or expand farms have to demonstrate, including by means of suitable marine modelling, that their proposals will not lead to adverse impacts.

As part of our Sector Plan for Finfish Aquaculture, we will be reviewing whether we need to strengthen our approach to protecting the marine environment from discharges of nutrients.

Discharges of medicines not currently authorised

Before considering authorising proposed discharges of new medicines and other chemicals not currently authorised under the framework, we will require sufficient data and time in advance:

In the absence of the above, we will refuse to grant an authorisation to discharge medicines and/or other chemicals which are not currently authorised under the regulatory framework.

The way we protect marine life from discharges relies on the sea’s capacity to disperse, break down and assimilate any substances in those discharges that have potential to cause harm if they are present at sufficiently high concentrations. We use environmental standards to limit concentrations in the environment to levels that do not cause harm whilst breakdown and assimilation take place.